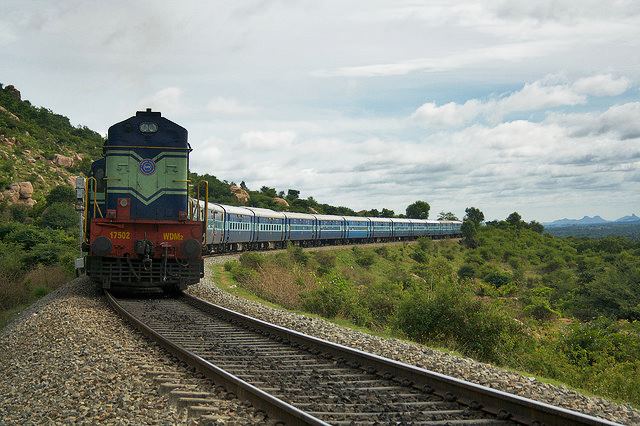 Many times we wonder how the driver is aware if he is approaching a level crossing or a bridge, from a kilometer before. He is required to slow the train down before it approaches such a place. Sometimes he blows a whistle to warn people at the level crossing before he can see it around the curve.

Here are some of the signboards put up next to the tracks to instruct the drivers.

It can be recognized as a black ‘L’ on a square yellow board indicates the approach to a level crossing.

These are denoted as ‘W’, or ‘W/L’ in black text on a square yellow board. The ‘W’ is a generic notation for the whistle while the ‘W/L’ stands for Whistle at Level Crossing. In some places it is denoted as ‘see/pha’ in Devanagari, it means ‘seeteeebajao-phatak’ in Hindi. These boards are often found before unmanned level crossings and sometimes for manned level crossings when there is no clear view. The sign is placed about 250m away from the level crossing.

The letters ‘C/T’ in black on a round yellow board is used to notify the driver to be careful as the train is entering a tunnel. The sign is placed just outside the entrance to the tunnel. It is not known if this sign is used on any railway other than on Konkan Railway.

Unlike other signs, this is on a concrete slab placed at the ground level. It consists of a number and an upward or downward pointing arrow, indicating a grade. For instance, a number ‘500’ suggests a grade of 1 in 500. The arrow is often simply a ‘v’-shaped mark instead of a full arrow symbol. A similar sign without an arrow and an ‘L’ instead of a number indicates the end of the grade.

Some newer gradient or incline warning signs are not on the ground as the ones described above but fitted to poles or catenary masts. They are usually yellow with blue or black arrows (although some blue signs with white arrows have been seen) with reflective paint, indicating upward or downward gradients; a double-headed (bidirectional) arrow is used to indicate a level section. The difference between these and the ones described above is that these are placed about 500m-700m in advance of the gradient they refer to, whereas the conventional grade indicators described above are placed at the point where the gradient or level section begins. The gradient indicators on catenary masts are also often accompanied by signs advising drivers to power up for the gradient.

It is used to alter the driver of a signal board ahead. The most popular kind of signal sighting board is a rectangular reflective board with a circle and two horizontal lines, with yellow on black. The next signal is generally visible from this point onwards. However, some experienced drivers spot the signals well before the sighting boards are crossed.

Next time you are on the train, you could look out of the window and search for these sign boards, and probably predict when the driver will slow down or whistle. Before you board, be sure to check your PNR status to ensure that you indeed have a seat on the train.

When you are visiting London, one thing you certainly won’t need to worry about is…