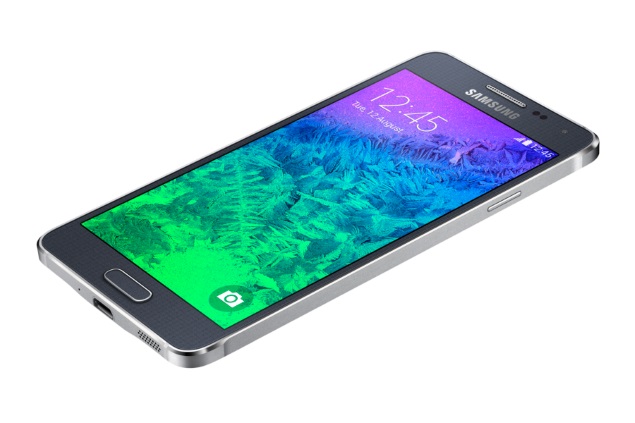 Samsung Galaxy Alpha, probably due to its metal side faces, thin body and a diagonal 4.7″ is regarded as the main competitor to the smartphone Apple. However, Alpha offers a number of interesting features.

When you first look at the full face of the device special differences across the Galaxy line you would not notice. Until such time as not inspect the unit on all sides. Naturally, there is not an all-metal body: the back cover is made of Alpha already familiar to us to S5 flexible “soft touch” plastic, complete with fine texture. However, for the Samsung is still very serious breakthrough. By the way, a little rubberized plastic, due to which the gadget tries at every opportunity to slip out of hands or with an inclined surface.

The device really get a compact and stylish. And if you compare its size with the iPhone 6, you obtain, respectively, 132 × 65 × 6.7 mm – brainchild of Samsung and 138 × 67.1 ×6.9 mm – the new flagship of Apple. Moreover, iPhone to get even heavier – 129 g against 114 g. Users can choose the model in black, silver and golden color. Processing side faces closely resembles that of the iPhone 5 / 5s. Small plastic insert on the metal frame is necessary for the correct operation of wireless communication modules. But with the buttons and connectors all pretty prosaic: the volume rocker on the left side, the key unlock screen – on the right. Headphone jack is located on the upper side, and a connector for charging, and USB – on the bottom.

On the cover except for the camera flash, there is a sensor to monitor your heart rate. On the front of the bottom is a fingerprint scanner.  Screen size – 4.7″ with a resolution of 1280 × 720 pixels (Super AMOLED). The display did not disappoint: viewing angles are excellent readability in the sun – also, in principle, the picture quality at altitude. Customize the screen “by itself” will be easier – the number of options that clearly contribute. You can pick up both bright and colder and soothing colors. Short conclusion: the display is not inferior to many competitors, and in some cases even exceeds them.

The camera in the Samsung Galaxy Alpha 12 megapixel with autofocus can shoot 4K-video, but the quality is clearly inferior to S5. Photos are easier in low-light conditions do not have to talk about high quality. There is probably to blame excessive “thinness” of the device – manufacturer failed to squeeze into the unit cell of greater thickness. The interface is not difficult, that, in fact, quite a plus.

But no doubt that in the similar price range you can get full HD display flagship, giving 720p display in Alpha is controversial and if Samsung will do this thing again in any of the flagship like Galaxy Note 5 then again Samsung will be criticized by the fans. But it would be clear after the Note 5 release date.