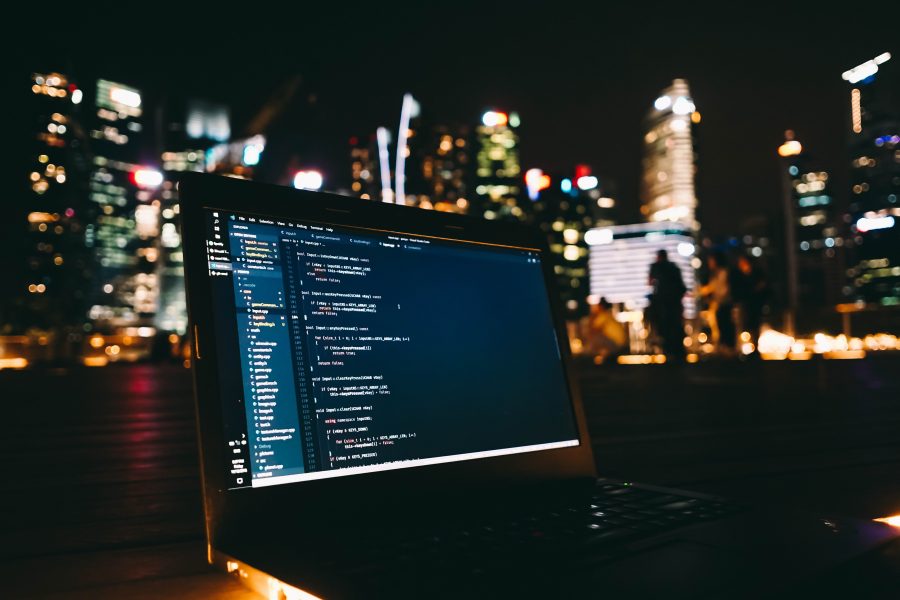 TIOBE and PYPL. What They are All About?

First, let’s see how these two ratings work since their work methods differ from each other.

TIOBE works on the principle of counting the number of visits in various popular search engines (Google, Yahoo !, Baidu). Meanwhile, PYPL calculates how often users searched for tutorials related to a particular language.

Because of this difference in counting methods, we have two completely different results and two different tops of popular programming languages. Let’s first take a look at the TIOBE rating. It is shown in the picture below. 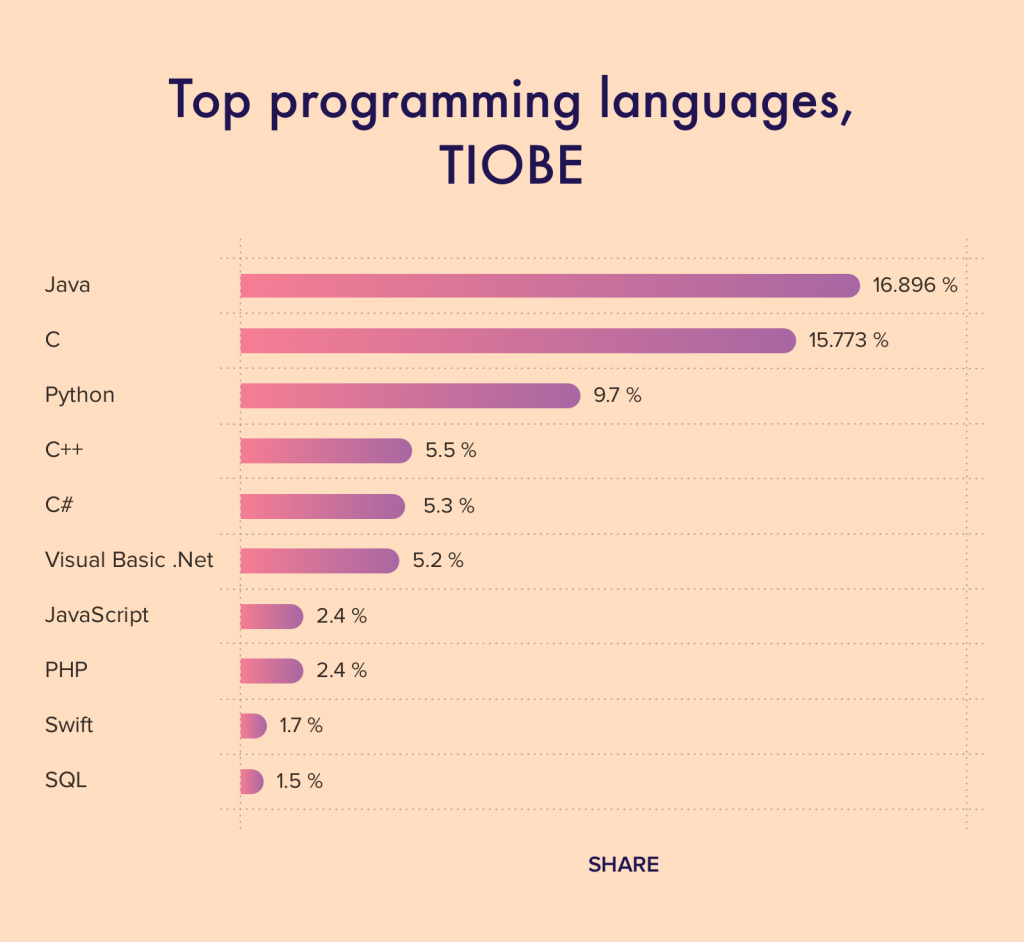 Now let’s take a look at the top 10 popular languages ​​according to PYPL. 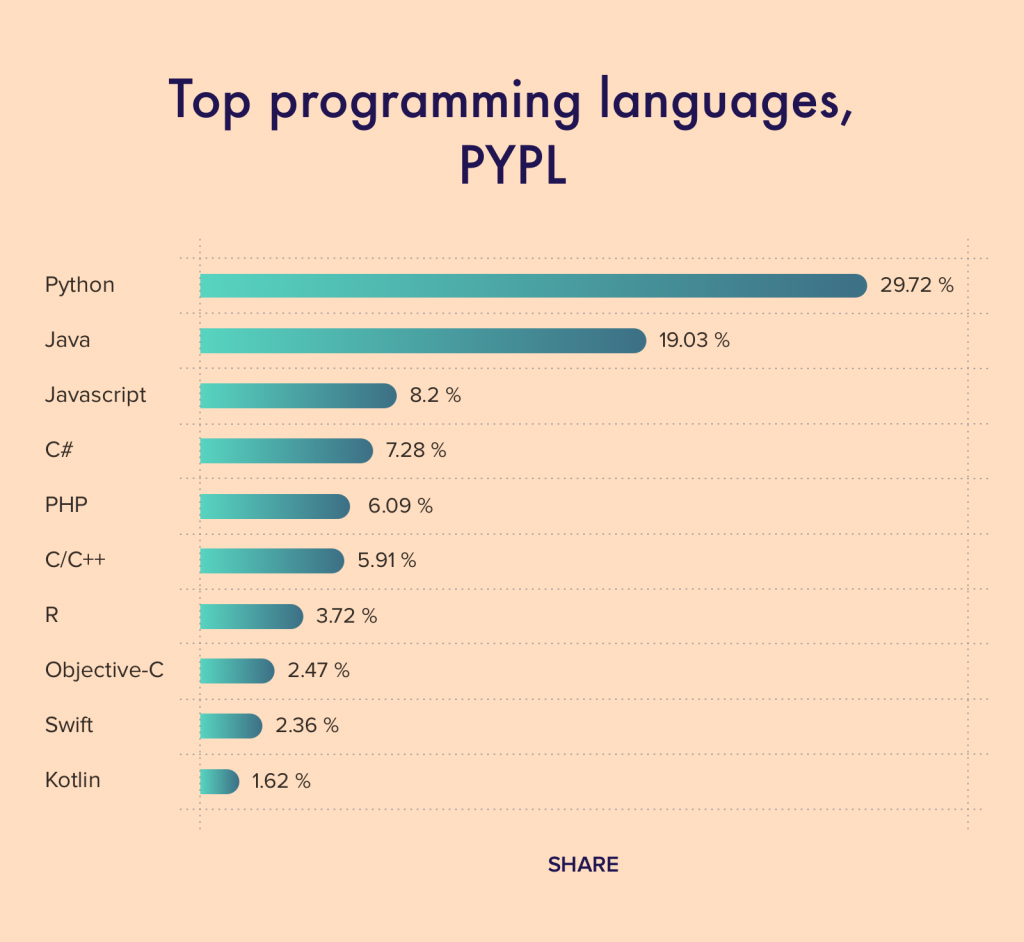 Now let’s move on to our top 10 popular programming languages.

The cornerstone of Kotlin’s popularity is the fact that every year the number of users of devices based on the Android OS is steadily growing. It is also worth noting that the scenarios for using the Kotlin language are not limited only to the development of applications for Android. Kotlin shows himself well in the development of server applications and various SDK libraries.

Among the popular applications created with Kotlin, we can list Tinder, Evernote, Netflix and Trello.

The Swift programming language is now the leader among the languages for developing applications for iOS. And all thanks to its phenomenal speed. Apple Swift claims to be more than 2 times faster than Objective-C, which is Swift’s main competitor. Also, do not forget that Swift has a very simple syntax that greatly simplifies the process of learning this language, as well as the process of supporting applications written in it.

The most popular Swift apps are Slack, Airbnb, FitBit and Pandora.

Despite the fact that Swift is actively catching up with Objective-C in popularity, this programming language is still a popular language on the IOS platform, since a huge number of IOS applications are written using Objective-C, for example, Apple Music and iTunes. These apps still need constant support from the developers.

Let’s start our discussion of the sixth place of our top with the C programming language. This language is a true development veteran who has remained one of the most popular solutions for almost 50 years. In order to more clearly outline the importance and significance of this language, here are examples of programs and systems written in the C language: Windows OS, Android OS, iOS, MySQL.

In turn, C ++ is very similar to C, since it is the same C language to which the concept of OOP (object-oriented programming) was added. The following products were written using the C ++ language: Amazon, Adobe Photoshop, Bloomberg, Spotify, and many others.

PHP is a very useful and handy tool for creating various web applications and sites. PHP is a server-side scripting language. It is quite an easy-to-learn language, which won the love of fans and popularity among developers. The picture below shows the most famous projects developed with PHP. 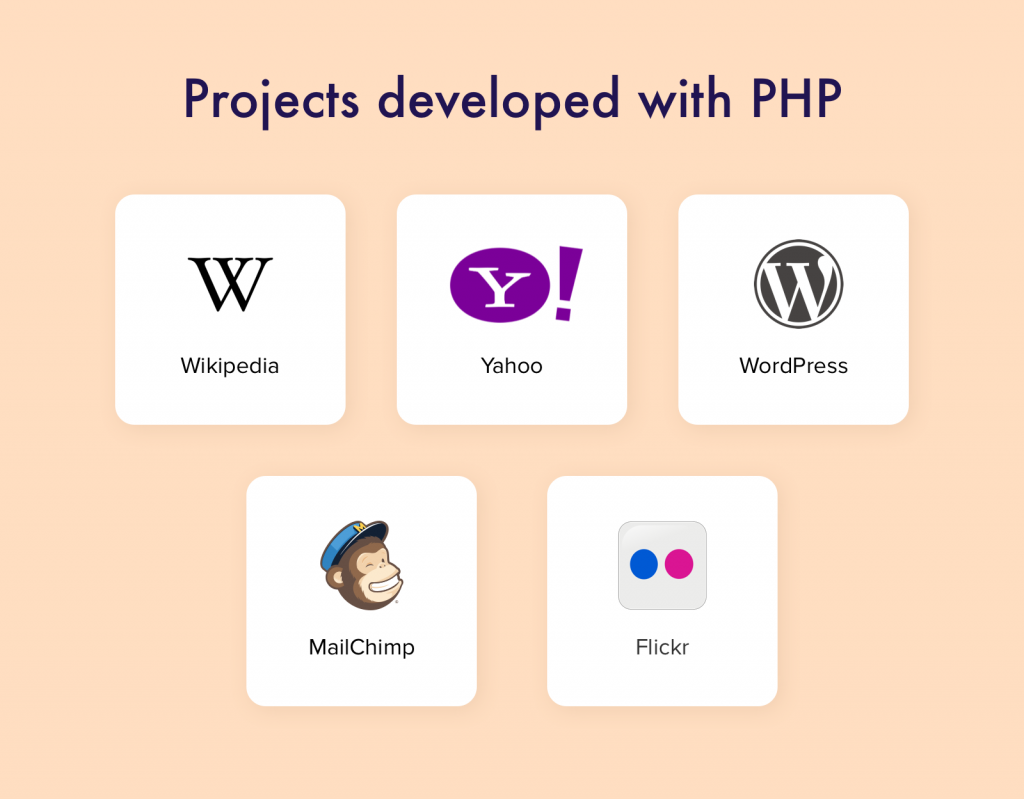 C # is another variation of the C language, but it also has some of the Java language features. One of its main advantages, which helps to gain popularity among developers, is that this language is extremely versatile. With C #, you can work in a variety of ways, ranging from simple web applications and games to artificial intelligence and the Internet of Things.

With the help of C#, developers made a lot of useful software. For example, Microsoft Visual Studio, Windows Installer XML, Beagle, and many others.

JavaScript is the cornerstone of web development, so it’s not at all surprising that JavaScript is on the list of the most popular programming languages ​​in 2020. Without JavaScript, all sites on the Internet would be boring and monotonous. It is he who enriches the pages of sites with various animated and interactive elements (buttons, drop-down lists, effects, etc.).

Another notable fact is that recently JavaScript can be actively used in client and server programming. This became possible thanks to the implementation of various frameworks such as React, Node and many others.

With the help of JavaScript, many popular sites have been written, for example, YouTube, Google, eBay and so on.

Java is one of the most popular programming languages with the most powerful support. And this is not surprising, since Google itself is responsible for supporting this language and Java is officially the main language for developing applications for the Android OS. High stability and high quality of code compilation are also some of the reasons for its popularity.

Python is deservedly the main leader in the fight for popularity. From a simple automation language, Python has become the main programming language for various web solutions and mobile applications. Python has earned its popularity due to a single, standardized library, easy-to-use frameworks, and easy-to-learn syntax.

In the image below, you can see famous applications built with Python. 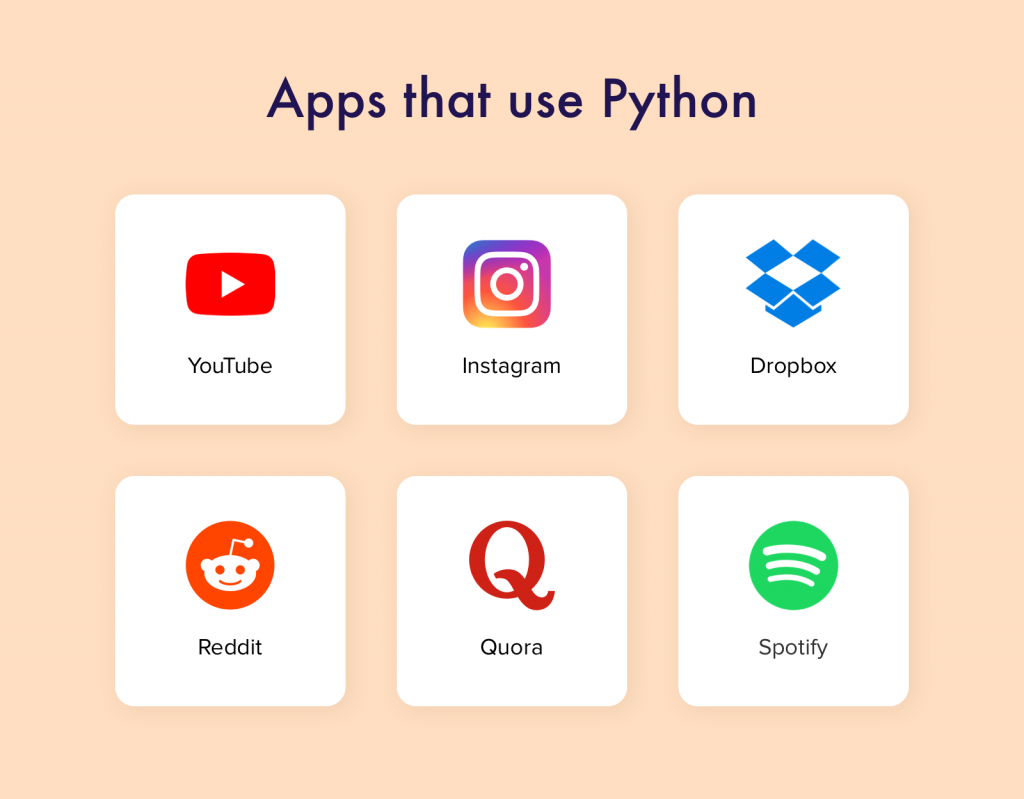 This may happen in the near future since there is a very clear tendency for the rapid development of programming languages such as Dart, Rust, and HCL. It is also impossible not to note the rapidly gaining popularity of frameworks. For example, the Flutter framework from Google is currently one of the most popular frameworks in the field of cross-platform app development.