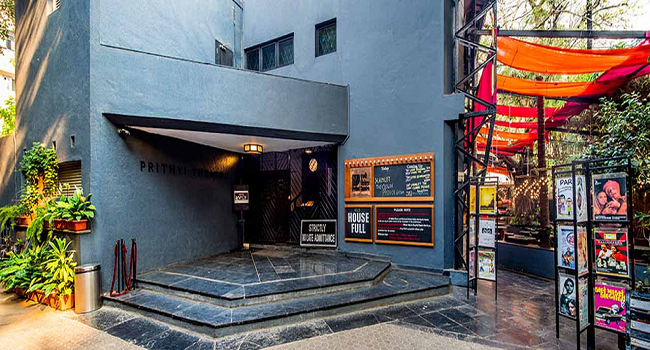 One of the best known theatres in Mumbai is the Prithvi Theatre, constructed by Shashi Kapoor. It was established in his father’s memory, the late Prithviraj Kapoor. This theatre belongs to Kapoor family, who are regarded to be among the most influential of all Bollywood based director / actor families.

In 1944, ‘Prithvi Theatres’ was found by Prithviraj Kapoor and back then was a travelling theatre firm, which ran for about 16 years. The modern theatre was built and designed under Shashi Kapoor’s wife, Jennifer Kapoor. It is located in Juhu, Mumbai. Its Managing Trustee is Shashi Kapoor, while the Trustee is Kunal Kapoor who looks after its daily affairs, managed by a small, highly efficient team.

What does this Venue Boast of?

This venue holds shows regularly throughout the year and on Mondays remains closed. It also hosts workshops based summertime annual programs as well as children’s plays, 28th February Memorial Concert, in November the annual Theatre Festival and several partnership programs which help to promote international cinema, poetry, documentaries language and performing arts, most of which are free for the public.

The Theatre was inaugurated on November 5th 19748. The first play to be held here was staged by Om Puri, Benjamin Gilani and Naseeruddin Shah and written by G.P.Deshpande titled ‘Udhwastha Dharmashala’.

In 1995, for marking its 50 years, a commemorative stamp was issued by the Indian government. This theatre still continues to flourish and nurture new talents, while being a source of inspiration for the entire theatre fraternity.

If you are interested to know about the forthcoming events to be held at this fabulous Prithvi Theatre, then going through the list given below can really help you to make plans to visit one with  your whole family, friends and colleagues and make the most of the visit.

The play is said about a Theatre celebration, of passion, acting and about life itself. Watching this play with the family can be a real great moment for you and enjoy it thoroughly.

A rhinoceros eats up the parent of James Henry Trotter, compelling him to live along with two repulsive aunts. Some strange takes place on a particular hot day, where a huge peach is seen to grown in his home garden. It takes James to some of the wonderful and wonderful place, leading him to experience one adventure to the other.

It is regarded to be a quirky drama involving a sex worker coming from a rural place and some film makers from the city. She asks them ten questions for every question that is put by them. Although illiterate, she is not a fool and knows how they are to be winded up. This drama is indeed worth the investment and the time. You are sure to enjoy every scene of it.

Knowing the above is sure to help you to make the most of your spare time and get entertained.